If you’re a parent, you really should visit Miller Park with kids; it’s one of the most kid-friendly ballparks in baseball, and the Brewers do a lot to bring in young fans.

Here’s just a few things you should know… 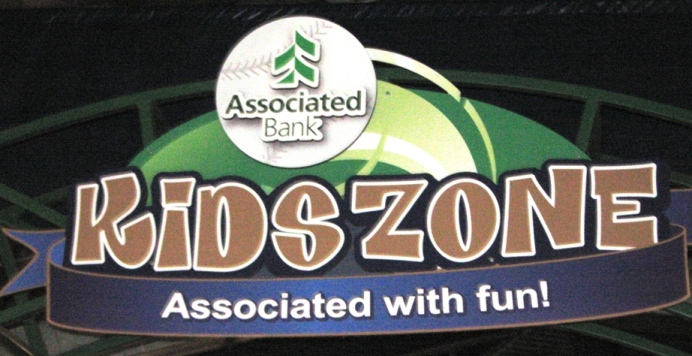 Kids get to do all the cool stuff.

Miller Park With Kids, Tip #1) Join The Club. The Brew Crew, like most teams, go after the young ones early with a Kids Club. For a very reasonable fee, your kid gets six ticket vouchers in the Terrace Reserved seats, good for most weekday games. It’s great if you plan to take the little one to Miller a few times. (And they’ll probably want to go back.)

The young one also gets a lanyard, a water bottle, a wallet to hold all that money he’s saving on tickets, and a poster, not to mention all of the exclusive stuff like be in a pregame parade, tour the ballpark, and get a picture with the racing sausages. Not a bad deal at all.

It’s very popular, so get on it well before spring training starts. 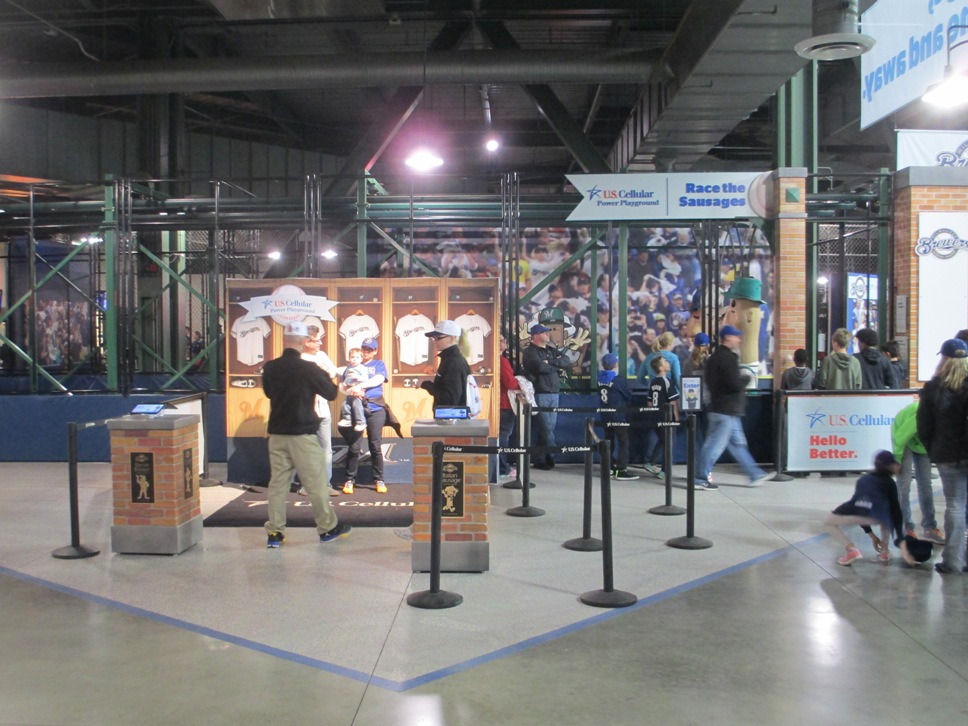 It gets much more crowded when the Sausages hang out.

Miller Park With Kids, Tip #2) Three Play Areas. On the Field Level at Miller is the U.S. Cellular Power Playground, where kids can participate in a race to first base or a small scale Sausage Race, sit in a huge glove or mock-up dugout for a photo, or use the pitching and batting cage. It will definitely keep the little ones occupied for a while.

On the Terrace Level is Bernie Brewer’s Clubhouse, an equally fun play and concession area full of padded stuff for smaller kids. It’s a hike to get there, but if you’re using your Terrace seats from the club you’ll be on that level already.

Outside of the ballpark there is a playground at Helfaer Field too, so the kids can burn off a bunch of energy while you’re waiting for the gates to open.

With all of these places to play here, they might actually want to sit in their seats for the game afterward! 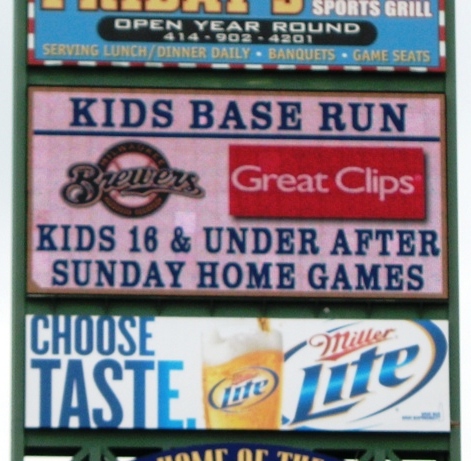 Sometimes turning 17 isn’t all that great.

Miller Park With Kids, Tip #3) Kid Promotions. The Brewers also run frequent promotions for kids; they can run the bases on Sundays, get autographs from a Brewers player on certain dates, or have their birthday celebration at the game. If you want to run the bases, sitting on the first base side puts you closer to the line.

There are contests to be an announcer for an inning, or pose on the field with a Brewer, listed on the Brewers website. These promotions are popular, so you should hop on them early.

One last thing: when a Brewer hits a home run, poke the kid and tell him to look up to Bernie’s Terrace in upper left field, where Bernie will slide down into the lower terrace. Everyone loves it.