If you’re looking for cheap seats at Miller Park, you’re in luck…there are a lot of them. Miller has a good amount of even really good seats that are affordable, but here are two options you can get with just what’s in your pocket. 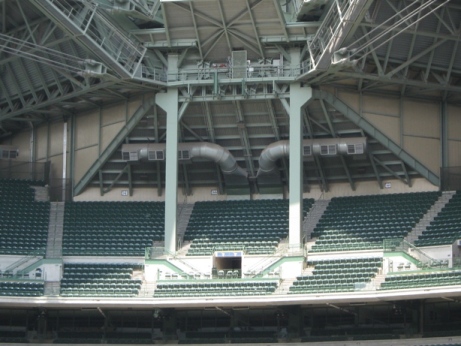 These poles actually go all the way to the ground. Or so the tour guide said.

Cheap Seats at Miller Park, Tip #1: The Uecker Seats. The Brewers offer their fans an opportunity to see a game for one dollar, in the humorously named “Uecker Seats”.

I’m dating myself with this, but I remember the Miller Lite commercial featuring “Mr. Baseball” Bob Uecker, in which he gets ousted out of his seat (to which his reaction is “I must be in the front rooooow!”) and placed in the worst seats in the ballpark, where he screams at the umpire.

It was funny, and the Brewers picked up on it when they opened Miller Park in 2001, declaring the highest seats behind home plate the “Uecker Seats”. These seats are blocked by pillars that hold up a portion of the ballpark’s massive roof, so sitting here closer to the aisles means a partially obstructed view.

But the seats are just four quarters. You can’t beat that.

In order to get a Uecker Seat, you have to get in line and buy them at the box office, pay cash, and enter the ballpark directly after buying the ticket. If you have a group they need to be with you. 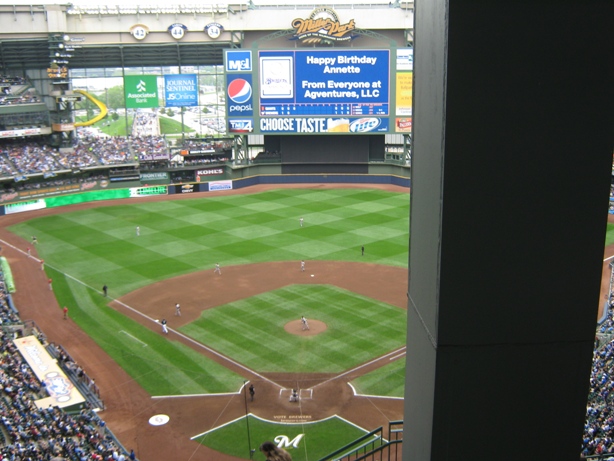 For a buck, you can see two-thirds of the field.

But once you’re in, you can stand just about anywhere, and many people simply move to a better seat during the game. But if you’re not close to the aisles, the view from the Uecker Seats can be perfectly acceptable (better than in the above photo, obviously).

The only caveat with the Uecker seats I have is this: for a high demand game, and the Brewers have quite a few of them, you will need to get in line early. This means you might not be able to enjoy the tailgating, and the smell of the sausages cooking may get to you.

Incidentally, the Brewers just added a statue of Uke sitting in the seats named for him. A great photo-op. 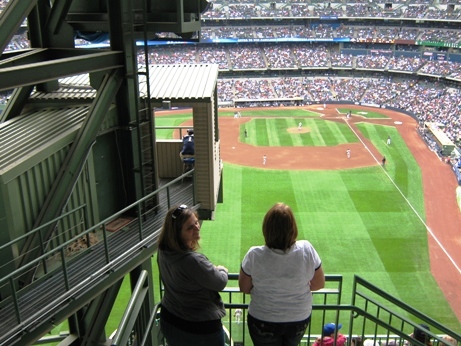 Great view of the slide though.

The Bernie’s Terrace seats are so named for their proximity to the platform where mascot Bernie The Brewer sits. Bernie stands there during the game, waiting for a Brewer to knock one out of the park (or hit an inside-the-parker, as happened my last trip there).

When this happens, he slides down his slide onto the lower platform. It used to be into a vat of beer, but the Brewers became concerned about their image when moving into Miller Park (?) and cleaned it up a bit.

So sitting in the Bernie’s Terrace sections (441 and 442), you’d think you’d get a good close up view of Bernie sliding. Depending on where you are, you might or might not. But your real concern will be that the affable mascot’s platform creates a ridiculously obstructed view. Sitting in the upper rows of Section 442, you will lose almost half of the entire field to this.

Not to mention that you will be about as far from home plate as seats get in Miller. Not a great way to watch a ballgame, so if you’re serious about seeing the game, you’ll want to avoid Bernie’s Terrace.

The nice thing is that next to the Uecker Seats, they are the cheapest tickets in the ballpark, cheaper than standing room even. And you can order the Bernie’s Terrace seats ahead of time from the Brewers’ website or box office.

Many people buy the cheap seats at Miller Park and just find a better place to sit. For lower attendance games, this is fairly easily done, so long as you don’t try to sit in a Field Level seat behind home plate. But you’ll have a much harder time doing this for a Cubs game or a weekend game.

That’s just two great deals at Miller; there are a whole lot of other ways to save a few bucks.  Stay tuned.