Here are a few Camden Yards photo-ops for the traveling fan. You’ll thank me… 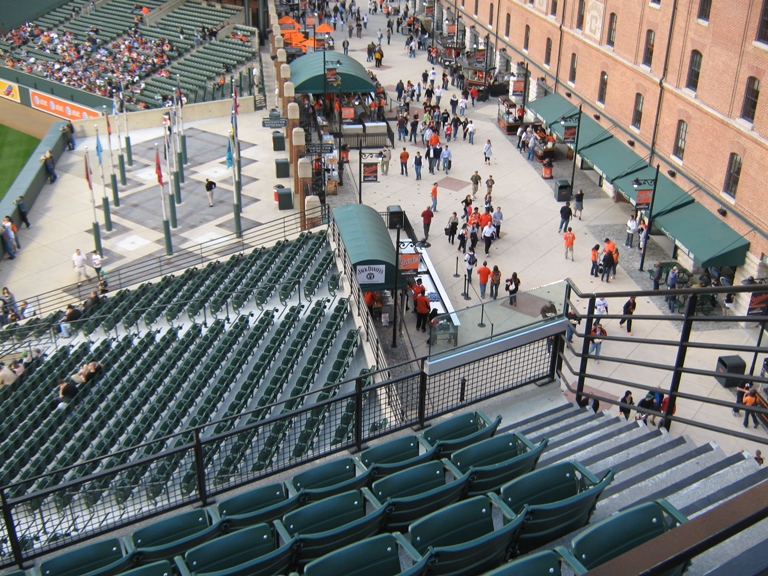 Ha! We beat all of you to our seats!

Camden Yards Photo-Ops, #1: Eutaw Street. Just because it isn’t on your list to get a barbecued turkey sandwich from Boog’s doesn’t mean you should miss Eutaw Street. Eutaw is the actual street name, but in the ballpark it is sandwiched between the Warehouse and the baseball field.

This is where the bulk of the non-ballgame attractions are; not just getting your picture taken with Boog Powell, but also snagging long balls hit in batting practice, visiting the team store, and reading the round plaques where all of the home runs landed on Eutaw.

I highly recommend entering the ballpark at one of the Eutaw Street gates in fact (except on giveaway nights); this is where you get all of your pre-game entertainment in.

These letters were actually taken from the old stadium.

One of the striking visual features of the Memorial Stadium façade was its dedication to the fallen soldiers in the World Wars in its unusual lettering. Recently the letters in the last sentence of this dedication—“Time will not dim the glory of their deeds”—were placed near Gate C at the southern end of the warehouse. If you’re an older fan, it will bring back memories. 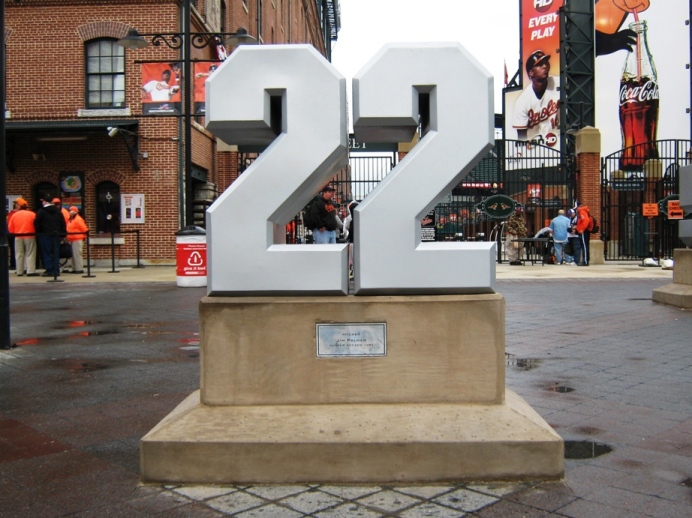 Wasn’t he the guy that posed in Jockey underwear?

Camden Yards Photo-Ops, #3: Retired Numbers. The retired number statues are in the plaza at the north warehouse entrance, and the nice thing about it is that there aren’t likely to be many additions to them soon.

There are six of them, dedicated to classic Orioles like manager Earl Weaver, pitching great Jim Palmer, and of course, consecutive games record holder Cal Ripken Jr. Most teams have their retired numbers on display somewhere, but not many have actual statues of the numbers. Worth a look.