I remember, when Camden Yards first opened, reading in brochures that the Orioles offered a ballpark tour. I remember thinking that it didn’t seem like something I’d be interested in, because at the ballpark I want to see a game. A pitching matchup. Home runs. Stolen bases. Extra innings. If you can’t root for the home team while eating peanuts and crackerjack, then why go to the ballpark? 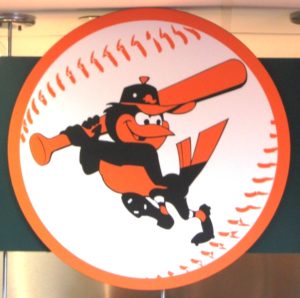 The logo that preceded Camden Yards.

But for the purposes of what I do helping baseball fans, I decided some time ago that ballpark tours would be helpful; I could get some great photos, have access to places I normally can’t afford, and maybe even learn a thing or two, and get any questions answered that I might have.

The first ballpark I took a tour of was Fenway Park in Boston. My wonderful wife Suzanne had given me Red Sox tickets for my birthday, the best birthday gift ever, and on our trip I convinced her to take the tour with me for the aforementioned reasons.

The Fenway Park tour starts in the Team Shop on Yawkey Way, where the tour guide starts off by asking if there are any Yankees fans in the group. Inevitably there are and they will, of course, proudly declare themselves, to which the guide will respond, “Okay, I’ll talk very slow for you.” And the tour continues in that vein, with the guide taking humorous shots at the Yankees throughout.

As I said, I didn’t think I’d consider a ballpark tour all that much fun. And I was totally wrong. The Fenway tour got me addicted to ballpark tours, and I take the tour whenever I can on baseball road trips. You learn about the ballpark’s history, stories of historic events that have happened there, and how certain parts of the ballpark like the Green Monster came to be. You get to see the field from several angles, often including the press box or the suites.

Most times you can sit in the home team’s dugout (I don’t know why that’s such an essential part of almost every ballpark tour, it’s not a big deal to me, but people love it). The tour guide will inevitably give people in the group a chance to show off their knowledge of baseball…and often little kids will answer their questions. 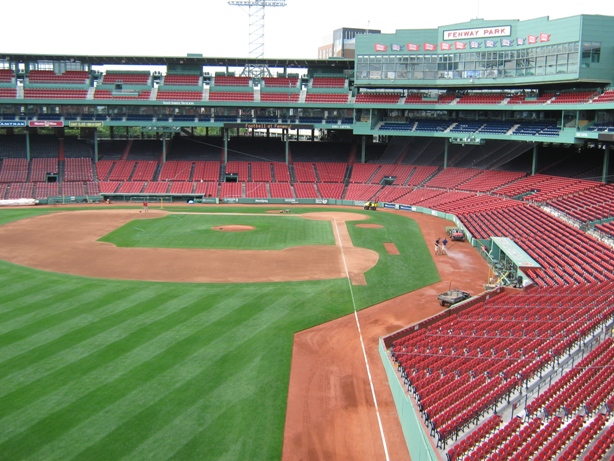 Fenway quiet and peaceful, as it is rarely seen.

But here’s the best part of a ballpark tour, something I never gave much thought to before doing it: you get to see a baseball field in the morning. I know that doesn’t sound exciting, but there’s a wonderful peaceful charm to it, especially on a bright summer morning. It’s quiet. Grass is getting watered or mowed. Maybe a fence is being repaired in the outfield.

You think about what goes on behind the scenes and start to realize that hundreds of people put in thousands of hours of work to prepare the ballpark for the madhouse it’s going to become that evening. There is something about being in a ballpark in the morning that appeals to the types that hear voices telling them to build a baseball diamond in their cornfield.

Since Fenway I’ve toured a total of…let me get my slippers off here…fourteen ballparks. Of them the Wrigley tour may have been the most entertaining, simply because there is so much history and so much that people don’t know, and you get to sit in the bleachers. But all the tours are fun; PNC Park in Pittsburgh and Miller Park in Milwaukee were especially neat and full of stopping points.

At Progressive Field in Cleveland, and later at Nationals Park in D.C., I had the good fortune of being the only person taking the tour at that time, and I had a very enjoyable time talking with the tour guide. It’s nice when you can move at your own pace.

Going to a ballpark for a game, of course, is one of life’s greatest pleasures at any age. But going for a ballpark tour on a beautiful summer morning is a wonderful experience in its own way, and I highly recommend it, especially if you’re visiting a ballpark in another city.