(Note: this review and this book were written before the glorious Cubs triumph of 2016. Eamus Catuli!)

Sometimes I think that if the Cubs won the World Series, it would be a gigantic letdown.

When the Red Sox finally broke their 86-year jinx in 2004, it was made much sweeter by the way it happened…an unprecedented comeback from a 3-0 deficit to defeat the hated Yankees in the ALCS. That would have been memorable even without a curse, but it lived up to how sweet a long-awaited World Series victory could truly be for Red Sox fans.

What could the Cubs do to match that, especially given that their futility has reached (and now passed) a full century? The White Sox went longer than the Red Sox did without a championship—a full 88 years—but the baseball world outside of Chicago almost yawned when they breezed past the Astros in the 2005 World Series. 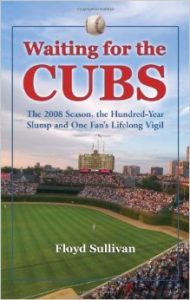 There hardly seems any way an end to the Cubs drought could match the buildup. Floyd Sullivan, author of “Waiting For The Cubs: The 2008 Season, the Hundred-Year Slump and One Fan’s Lifelong Vigil”, doesn’t seem overly worried about the possibility.

Most people appreciate that it’s tough being—or more correctly staying—a Cubs fan. But until one reads Sullivan’s account of the 2008 season, one doesn’t really feel the effect of a lifetime of devotion without a payoff and with no proverbial light at the end of the tunnel. 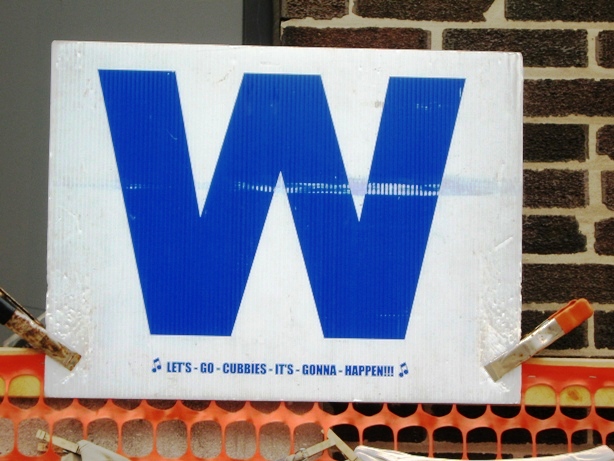 Throughout the book, despite that the Cubs have one of their best seasons in years, Sullivan—and his equally devoted Cubs fan family—are always expecting the other shoe to drop, always waiting for the imminent disaster to befall their heroes.

One could hardly blame them, especially after the 2003 NLCS, when Steve Bartman’s unfortunate blunder sparked a legendary collapse. Despite that a writer of Sullivan’s skill could have easily put a few gratuitously heart-wrenching pages in his book about the incident, he almost skims over the subject, informing the reader that “if you’re interested in reliving it, Google Steve Bartman.”

Sullivan writes from a personal angle, but the book never feels like someone telling his own story. Instead he shares the pain and occasional euphoria of being a Cubs fan, something his family and friends, and certainly any fan, can relate to. At one point he humorously shares the possible double meaning of what his children get written on their Wrigley brick dedication, which reads simply, “Thanks, Dad”.

His family has moved from Chicago to York, Pennsylvania; and while this precludes frequent trips to the Friendly Confines each year, it does enable him and his family to see the visiting club in both Philadelphia and Pittsburgh, which they do frequently, with a trip to Washington thrown in. His description of Nationals Park, which opened in 2008, is spot-on accurate.

His tales of trips to Pittsburgh are hilariously fraught with the dangers of the western PA Turnpike (with which I can definitely identify), but also a couple of weather miscalculations…one trip ends with a game postponed in what he believed was hardly a downpour, as a result he cancelled a later trip on his own due to torrential rain and missed a full nine innings of Cubs baseball at PNC Park. 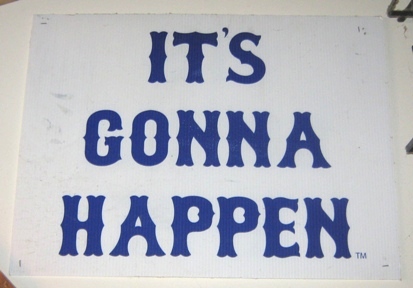 The book mainly focuses on the story of the Cubs’ 2008 season, with some side tales of Cubs fan agony. It’s the centennial of the team’s last World Series championship (yes, that was in 1908), but it’s also a season where fans believe the team has the best chance to break the curse that befalls them, with pitchers like Carlos Zambrano, Ryan Dempster and Carlos Marmol, and position players like Derrek Lee, Aramis Ramirez and Kosuke Fukudome.

Despite that the Cubs won 97 games and the NL Central Division in 2008, though, Sullivan never seems to believe that the Cubs will achieve the ultimate glory—indeed he almost predicts an easy victory for the Dodgers, the Cubs NLDS opponent. It bears out, with the Dodgers whitewashing the Cubs 3-0 in the series. Another Cubs season, as he puts it, ending with a loss.

But it’s not all bad…the family actually meets Ryan Dempster over the winter.

“Waiting For The Cubs” concludes with the story behind the Fred Merkle boner that cost the Giants the 1908 pennant…seemingly the last time that the baseball gods smiled on the Chicago Cubs…and Sullivan does a better job than most at clearing up what really happened that day at the Polo Grounds.

Many books have been written about the Chicago Cubs and their futility, but few of them capture the mind of the Cubs fan. Sullivan does it perfectly, making the story both personal and universal. No Cubs fan reading this book would disagree.

Nor, in fact, would any baseball fan. Highly recommended, whether you’re a fan of the Cubs, White Sox or Cardinals. 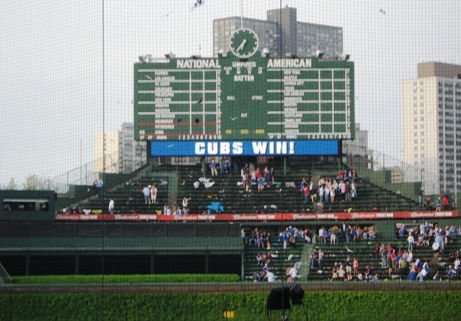 You can still hear Harry saying it.