Fans whose yearly vacations revolve around a baseball road trip probably know the name Joe Mock. If they don’t, they should.

Mock is the author and webmaster at Baseballparks.com, the premier website for baseball roadtrippers. He is also the author of 2001’s “Joe Mock’s Ballpark Guide”, a delightfully illustrated book about the 30 MLB parks in use at the time. He regularly contributes to USA Today’s Sports Weekly about the North American homes of baseball.

His credentials for all of this?

How about visiting all 203 of the professional ballparks currently in use – that’s major league, spring training and affiliated minor league ballparks – a total that Mock will reach when he visits Suplizio Field in Grand Junction, Colorado, this July 12th. 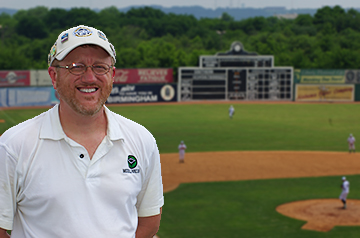 Joe Mock of Baseball Parks, at the Rickwood Classic in Birmingham, Alabama.

I caught up with Joe when I heard about this milestone, and he was kind enough to share with me his thoughts about the feat and how the journey started.

“About 20 years ago, I got the crazy notion that I’d like to see how many different ballparks I could visit in one season,” he remembers. “My first year of trying I was overjoyed when I got to ten ballparks, with the tenth being in Cleveland. At the time, I wondered if I’d ever be able to reach such a lofty perch again, because ten seemed like so many.”

Visiting all 203 wasn’t initially his goal, “but as I kept knocking them off, I kept getting closer. Along the way, I achieved the objective of seeing games in all 30 MLB parks. That happened in 2001, when I went to the Metrodome in Minneapolis.” (note from Kurt: yes, Joe has been to Target Field.)

Over time, his touring pace increased. Significantly. Imagine visiting 47 ballparks in one season – and calling it a down year. That was Mock in 2009, when he was challenged with two new venues in New York City, three new spring training facilities, new ballparks in Gwinnett, Columbus, Fort Wayne, Reno, and Bowling Green, and two significantly renovated baseball stadiums.

By this point, with a ballpark book and website in his name, plus dozens of ballpark-related projects – like publishing a poster – visiting new venues and sharing his insights about them had become his norm.

Joe Mock’s website is full of detailed reviews of dozens of ballparks. In each, he describes the ballpark’s setting and design, along with his likes and dislikes, all from the perspective of a dedicated fan of both baseball and its architecture.

After scrutinizing over 300 ballparks (the larger total includes non-affiliated and college ballparks), including venues that have now been replaced, he’s come to the conclusion that there are two things he likes to see in a park.

“First, I want to see something different,” he points out. “In the 1990s, the vast majority of new minor league parks looked the same. Most looked like you could lift them up and drop them in another market, and it wouldn’t have made any difference. That’s why one park of that era, the one in Altoona, has always stood out to me. It was very distinctive and picked up on the area’s fascinating railroad history.”

Which brings Mock to his second most-desired ballpark attribute, which in some ways is related to the first. “I want the park to have a ‘sense of place,’ so that it looks like it belongs in its city. I want it to have the appearance that it couldn’t have been built anywhere other than where it is.

“PNC Park in Pittsburgh is an obvious example of this. In the minors, Altoona, North Little Rock, Corpus Christi and Stockton have always struck me as really belonging where they were built. With the exception of Altoona, the whole Eastern League looks like any park could’ve been built in any of its markets.”

Needless to say, he has his favorites and not-so-favorites. Tops on his list is Wrigley Field in Chicago — a structure that Mock, who isn’t afraid to use a touch of exaggeration occasionally, calls “the greatest structure ever built by man.”

Mock believes that Wrigleyville, the neighborhood that surrounds the Cubs’ beloved home, “certainly offers the greatest setting in sports. The structure itself is stately and the sense of history is overwhelming. I truly love every visit I’ve ever made there, and I’ve been there plenty of times, almost freezing to death at several early-season games.”

He is conflicted, of course, about the planned renovations there, since like many Wrigley fans, a part of him doesn’t want a single change to be made. “However, when I come to my senses, I realize that a baseball franchise has to make money, and the ad signs and video screen will provide revenue streams that other teams have had for years, and the Cubs haven’t.

“And if that revenue helps keep the Cubs in Wrigley for another couple of decades, then that’s good enough for me,” he added emphatically.

While he doesn’t often get an argument over his opinion of Wrigley’s greatness, Mock has gotten occasional grief from website visitors over his rankings of other ballparks. One example was his favorable piece about the new Marlins Park in Miami, which was an architectural risk that didn’t go over well with some ballpark fans.

“I didn’t like its location, but its bright colors, fantastic food, liberal use of art and miraculous engineering truly make it a marvel. And it’s perfect for South Florida. Baseball fans should go to Miami to see it.

“However, mostly because folks around the country tend to hate the Marlins, their owner and their former manager (Ozzie Guillen), they couldn’t accept that the team’s ballpark is any good. Interestingly,” he adds with a chuckle, “most of the harshest criticism of me came from people who had never been to Miami.”

Mock, of course, is happy to entertain the opinions of his readers, providing comment sections at the end of his reviews. And he does engage dissenters, thoughtfully and respectfully. After all, talking about visiting ballparks is the next best thing to doing it.

To visit upwards of 50-60 baseball cathedrals a year is indeed a challenge, especially when it’s not a full-time job.

“It helps that I never lose my motivation to travel long distances to visit baseball facilities. Once I realized how passionate baseball fans are about parks, it gave me even more incentive to visit and report on them.

“Truly, if there is a ballpark I want to see, I find a way to make it happen – like Grand Junction, for instance. Sometimes, it just takes me a while to work a place in.”

Many of his readers don’t realize it, but ballpark chasing isn’t his primary job. “I operate an agency that deals with health insurance, and I have clients all around the country. Therefore, some of my travel to see ballparks is actually part of my day job, while frequent flyer miles accumulated doing the business travel help get me to ballpark destinations later on.”

It also helps that his website is successful. “By no means does this (the frequent-flyer miles) cover all of the costs, but I’ve been fortunate that my freelance writing has generated revenue that I then spend on going to more ballparks. Also, Baseballparks.com has gotten more and more popular, and ads that appear on it add to the incoming revenue.

“I don’t do all of this ballpark visiting because it’s my job to do it, because it isn’t. I do it because I really love visiting and assessing ballparks.”

Having visited all of the ballparks currently in use is a remarkable achievement indeed — and it’s a reflection of just how much we baseball fans love the game. To all of us, nothing beats seeing it live with a favorite local sandwich sitting in our laps. (Joe’s favorite concession stand, by the way, is Turkey Mike’s BBQ in San Jose.) It’s hard to imagine that Joe Mock would have any plans to slow down – and he doesn’t.

“I will continue to go to every new ballpark as soon as it opens,” he predicts. “And soon thereafter, readers can expect an in-depth review of the park along with dozens of photos. I’ll also continue to provide updates on all of the ballpark news of the day, on my site and via Twitter. And as long as the USA Today sports editors keep wanting me to write ballpark-related pieces for their publications, I’ll gladly take on their assignments.”

While it’s true that only a handful of brand-new baseball palaces open each year – except in the aberration of 2009 as Mock reiterates – the changes made to existing venues never stop.

“The ballpark renovations will continue to keep me running around to see all of them, and when the changes are major enough, I will do an in-depth review of them for my readers.”

So while having seen all of the 203 current parks is truly impressive, Joe reflects that “the fun is in the chase more than the achievement of the goal. I’ve truly had a blast along the way, and met a lot of outstanding people. Some of my best friends today are guys I met at ballparks.”

People who, no doubt, were fascinated by the depth of Mock’s baseball travels. And probably a little envious, too.

FREE PDF for traveling baseball fans! (That would be you.)

You’ll also score this PDF, listing some of Kurt’s favorite sites for traveling baseball fans, absolutely free of charge…just for stepping up to the plate and subscribing.