Few things were funnier than my father’s occasional profanity-laden philosophy.

Before baseball’s last collective bargaining agreement, I asked him if he would quit watching if the players went on strike again. Like everyone else, he was angry as hell about 1994 and once said to me that he wouldn’t care if he never saw another millionaire play baseball again.

My dad believed that we should spend our short time here being happy, and nothing made him happier than baseball.

I remember way back when cable television first appeared, and one channel just showed line scores of progressing games throughout the league every night. It was the equivalent of just staring at the out-of-town scoreboard at a ballpark. He’d leave that channel on all night if he couldn’t find anything else to watch, and it was just fine with him.

Later I couldn’t count how many times he told me how much his own father would have loved the baseball packages that today enable fans to watch any game around the league. I never doubted that, because Dad sure loved it. He’d sit in his chair, keep score of two games a night and be happy as a clam.

Dad was baseball smart enough that his fantasy team won him $400 one season. Most years, though, his teams were hobbled by injuries. It drove him nuts. In our phone conversations he would spew his frustration: “You aren’t gonna believe this Kurt, this is beautiful!” And then he’d list his dozen or so stars that were on the DL. Sure enough, when they healed, his team would climb up the standings, but often too little too late.

I really believe he might have made a decent GM. Two seasons in a row he predicted the World Series winner in July.

In 2003 he declared the Marlins to be the team and didn’t blink twice when Josh Beckett shut down the Yankees in Game Six of the Series. He probably wasn’t the slightest bit surprised at the Cubs’ collapse in the Bartman game, either.

The following July he went out on a limb, defied the baseball gods and picked the Red Sox.

Back then I bought into the Curse—not so much because I really believed it existed, but because so many people did that it affected players and managers on the field.

Take the 2003 ALCS (please), when Red Sox manager Grady Little was too paralyzed to notice that the Yankees were pounding everything Pedro Martinez was throwing, and the Sox lost a game they should have easily won. I e-mailed Dad the next day and said “it ain’t the Curse of the Bambino, it’s the Curse of the Bad Manager!”

He agreed, adding that the confusing part was that he’d been bitching all year to his girlfriend Carole…who wouldn’t have had a clue what he was talking about…that all year long Grady spent games changing pitchers until he found one the other team could hit.

Remember when I picked the Red Sox to win the World Series and you said “Talk to me in November?”

I can wait until Monday.

Despite the dig, I was duly impressed. His streak ended in 2005 though; he picked the Braves.

Not long ago Dad told me that he’s in trouble if God is a Yankees fan. His father was a Red Sox fan who used to root for the Yankees’ plane to crash. My father grew up a Yankees fan who idolized Mickey Mantle. Somehow the two still spoke to each other.

In his thirties Dad outgrew his misguided support of the Evil Empire and became an Orioles fan, while the Smiths lived in Towson just minutes away from Memorial Stadium. With the switch he raised a family of loyal O’s fans, who by definition despise the Yankees.

But after about ten years of Peter Angelos, Dad had had enough and switched his allegiance again…reaching the legal limit for one lifetime…this time to the Red Sox, his father’s team. He may have played a part in breaking that Curse. After all, he believed in the Red Sox in 2004. Maybe that was all it took.

During the mini-uproar when Derek Jeter was busted pretending to be hit by a pitch, my father shared with me something his father once told him: “Bill, ain’t none of them Yankees are any damn good.” He added, “You know what, Kurt? He was right.”

Dad possessed a typical Red Sox fan’s attitude toward the Yankees, but he especially disliked Derek Jeter…and the obligatory gushing press towards the Yankee great. He never bought into the Jeter Is God mentality, ever, never missing a chance to point out how overrated a fielder he was, and always letting me know when “the greatest player ever hit another 200-foot pop-up over that bull**** right field fence in Yankee Stadium again!”

That was Dad. He loved the game of baseball and especially loved going against conventional wisdom. He knew that Cole Hamels was the real ace on the Phils; that Rick Ankiel’s switch from being a pitcher to an outfielder was far more historic than the press it got; that Tony La Russa was overrated as a manager and that the American League was always superior. In June of last season, he dismissed the Yankees’ strong start and assured me they wouldn’t make the playoffs. He was right about that, too.

Dad could forgive you for not knowing the game like he did, so long as baseball knowledge wasn’t part of your job description. His disdain for the Philadelphia sports media was legendary. He had no patience at all for WIP hosts or Inquirer writers—people who were somehow paid to cover baseball while knowing so little. Throughout the season Dad could always tell you what was really going on with the Phillies or any other team, and if you gave a hint of parroting something Angelo Cataldi said, he would dedicate the next few minutes of his life to making sure you never did it again.

He would have been great on the radio, especially in Philly. Whether he was talking baseball, politics or anything else, Dad didn’t have a PC bone in his body.

For those who knew him well, it was one of the most endearing things about him. His notorious cantankerousness effectively masked a sensitivity that could melt the coldest of hearts. No one who dared argue baseball with him would ever believe it, but he really was a sweet, generous, kind-hearted man. Carole, his children, and his closest friends all knew that.

I’m not going to just miss my father. I’m also going to miss the most knowledgeable and dedicated baseball fan I ever knew.

Welcome to heaven, Dad. Go give those lazy sportswriters hell, if there are any. 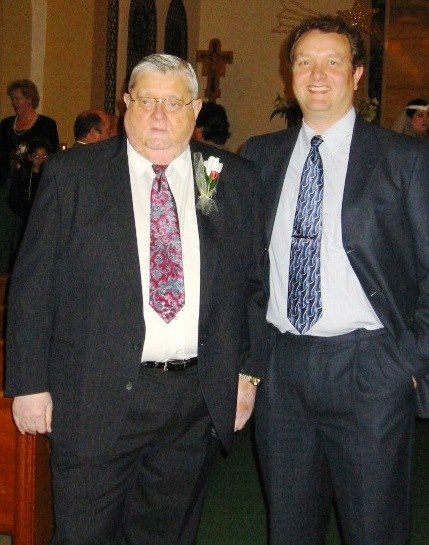