I’ve mentioned elsewhere on this site that Brewers fans love to attend games in groups. If you’re gathering a group and have the means (or a cool employer), you should look into the Miller Park party areas. These are all-inclusive spots with major sponsors that keep the party going even when the game starts, without having to worry about the tab you’re running.

Here are three that I like for various reasons… 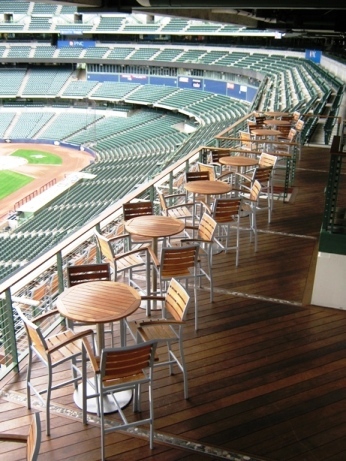 Dibs on the seats facing the field!

Miller Park Party Areas, #1) The Northwestern Mutual Club. The Northwestern Mutual Club is the located down the left field line in the Club (third) Level. At the Club there is a fancy, carpeted, climate-controlled indoor dining area with décor celebrating team history, and several types of seating outside…from tables and chairs to seats at counters.

These Club tickets include the daily varied premium buffet prepared by the Club chef, which includes a carving station and a gourmet salad station, along with the brats, nachos and popcorn.  Two free drinks (beer or wine) are included, and there are bars on the inside and near the seating area outside. There is even an Alex’s Lemonade stand that distributes proceeds to children’s cancer research from lemonade sales.

Like with the other group areas, it sounds expensive to get in, but it’s not bad at a per-person rate. The Club is pretty cool if you have the means, and the view from the seats isn’t half bad. 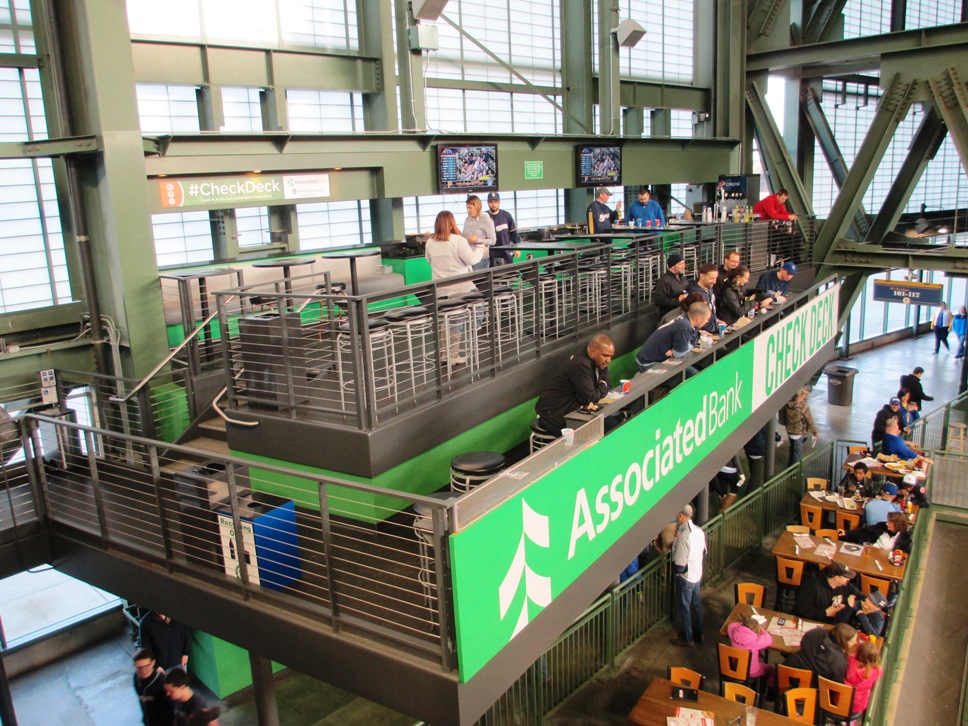 No sharing chicken with patrons below please.

Miller Park Party Areas, #2) The Associated Bank Check Deck. The Associated Bank Deck is lower than most party areas, but pretty distant from home plate in left center field. This deck has barstools with tables, plenty of space to mingle with fellow bank customers, and general admission seating that overlooks the home team bullpen. It is very close to Bernie’s Slide, so you have that.

The Associated Bank Deck is mostly for groups, who get a decent deal on tickets. The game ticket includes a buffet (with similar items as the rest of the party areas, but with pulled pork and chicken breasts in case that matters to you) that goes until an hour after the first pitch and also includes two beers. There’s a private bar with TVs to watch the game.

And that’s not all; there is a private entrance (adorned with the Bank’s logo and colors) that bank card holders can use regardless of where their seats are. It’s convenient to the east lots of the ballpark and is right there at the seating area when you enter. 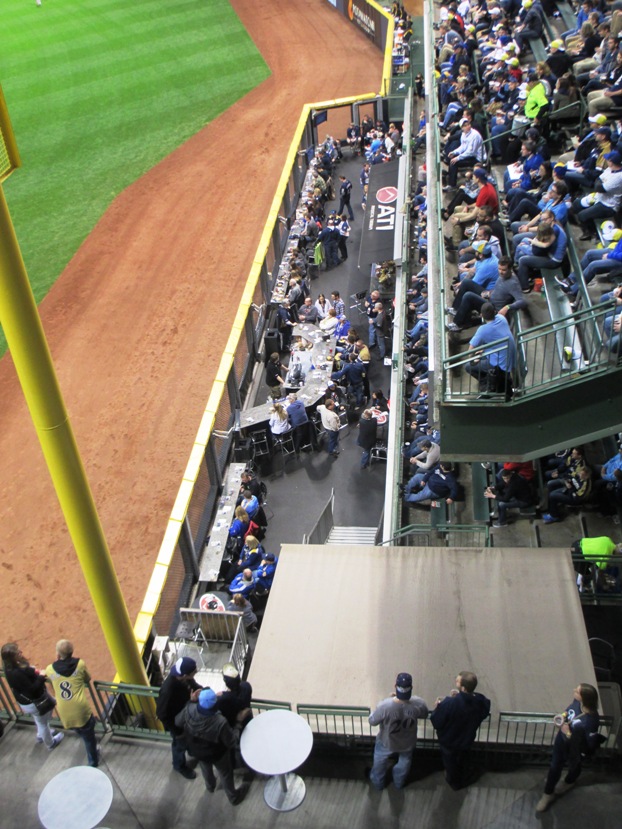 Watch for a batting practice home run in your nachos.

Miller Park Party Areas, #3) The Aurora Health Care Bullpen. The Aurora Bullpen is on the field level behind the right field fence, next to the visiting team’s bullpen. The Patio is for groups, although individual tickets are sometimes sold.

The area includes a full bar (outside!), hi-def TVs, and enough tables and barstools and such to accommodate around 75 people. Your group gets a buffet that includes brats, dogs, BBQ chicken sandwiches, mac and cheese, a nacho bar, and two complimentary beers (Blue Moon!).

Tickets go for around $100 a person for the moment, which with a buffet and two beers is a decent value. The view isn’t great through the fence, but it’s a neat place to hang out and feel like a relief pitcher.

That’s three spots where fans gather courtesy of their employer or to celebrate some other occasion with a Brewers game. Lots of fun for all with their baseball. Stay tuned.