Here are three varieties of Citizens Bank Park cheesesteaks…two of which are iconic city staples that you can try without having to leave the ballpark and drive around the city. When people think Philly, they think of submarine rolls with sliced beef and cheese in them. 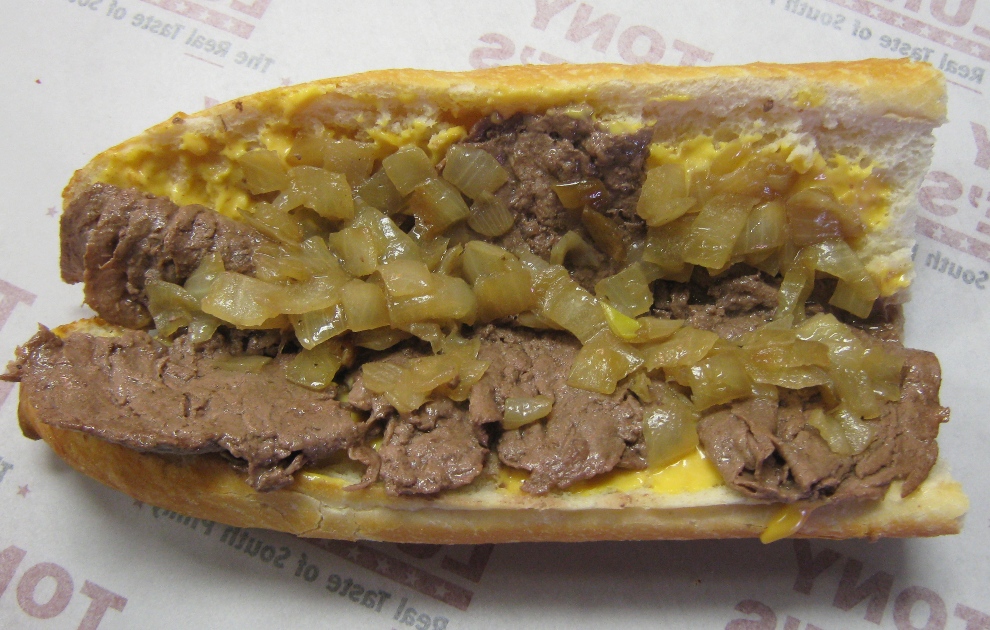 Citizens Bank Park Cheesesteaks, Tip #1: The Tony Luke’s “Whiz Wit”. I don’t know why Philadelphians have such a hard time saying “onions”, but for some reason “with onions” is abbreviated to “wit” here. And Whiz is, of course, Cheez Whiz. The one and only.

Tony Luke’s doesn’t chop up their beef too fine, but they don’t just put the whole slab on the roll either…so they’re something in between Pat’s and Geno’s in Philly, if you’re familiar with the two (I guess if you are, you’ve probably heard of Tony Luke’s too). And I can’t find many other uses for Cheez Whiz, but I will admit it’s great on a steak sandwich.

Tony Luke’s at the ballpark also has a popular roast pork and provolone sandwich, but we’re talking about cheesesteaks here. 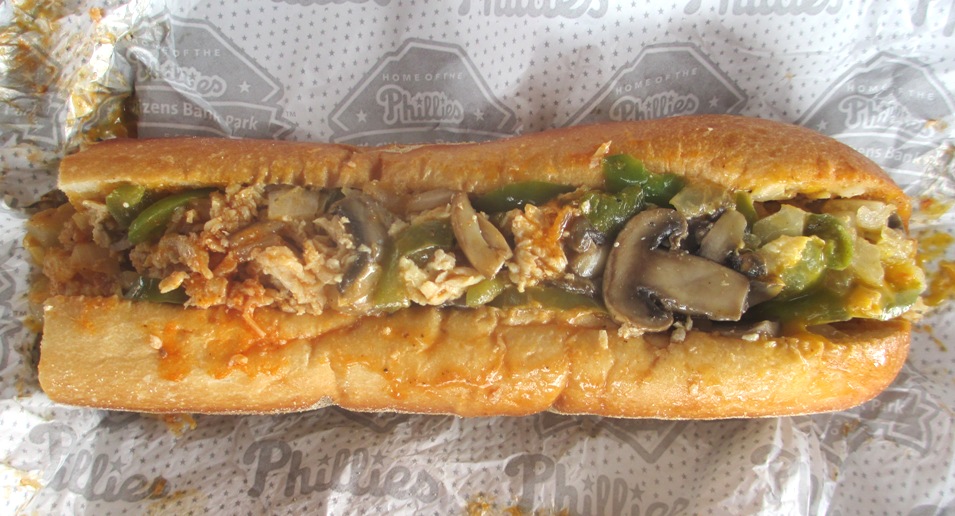 A Campo’s Heater sandwich with the “works”. Let’s just say it “works”.

Citizens Bank Park Cheesesteaks, Tip #2: The Campo’s Heater. Campo’s Deli is a long time Market Street institution…in a city where everyone is advised to try Pat’s or Geno’s, Campo’s is a place that locals know about and patronize rather than getting in long tourist lines for Pat’s.

The Heater is my favorite of the Bank’s cheesesteaks. It’s a cheesesteak kicked up a few notches, or more correctly a few hundred thousand Scoville units, with Buffalo sauce, jalapeno cheddar, and jalapenos piled on if you want.

It seems required to add the jalapenos, because you asked for heat, right? But truthfully, while I do pile some on, it isn’t necessary…the Heater is a pretty hot sandwich on its own. Highly recommend a beer or other drink with it. But it’s not so hot that there’s no taste. Plenty flavorful.

Here’s a pro tip for Campo’s: they have a “Works” sandwich too, with onions and mushrooms and stuff, and you can get that with the Heater cheese and sauce. Makes for one truly awesome sandwich. 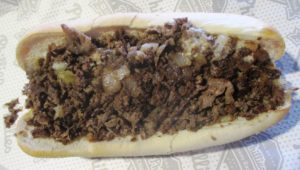 Get beefy at the Bank.

Citizens Bank Park Cheesesteaks, Tip #3: Delco’s Original Cheesesteak. Delco’s used to have its own kiosk and was a nice alternative to Tony Luke’s and Geno’s, but I believe now they’re the official meat provider for the whole ballpark, so if you go to one of those generic stands like the Cobblestone Grill you can get one.

Delco’s made some pretty decent shaved ribeye, and it’s a perfectly good sandwich if you don’t want to wait in line in Ashburn Alley. 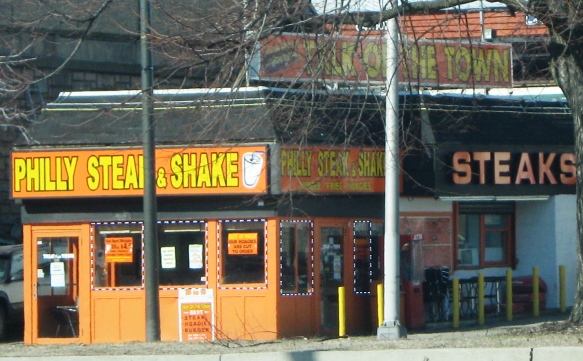 Not to be confused with that “other” Steak & Shake…

Citizens Bank Park Cheesesteaks, Bonus Tip! There are two cheesesteak outposts just steps away from the ballpark, both of which are highly regarded by most people I talk to and are a little bit cheaper than inside. Remember, you can wrap it up and bring it into the ballpark.

Talk of The Town is located on Broad Street at the foot of the Sports Complex exit coming east from I-76. Very easy to pull the car in and grab a sandwich. I honestly don’t know why I don’t see bigger crowds there before games, since it gets decent reviews, but several friends of mine have tried it and said they’re great. 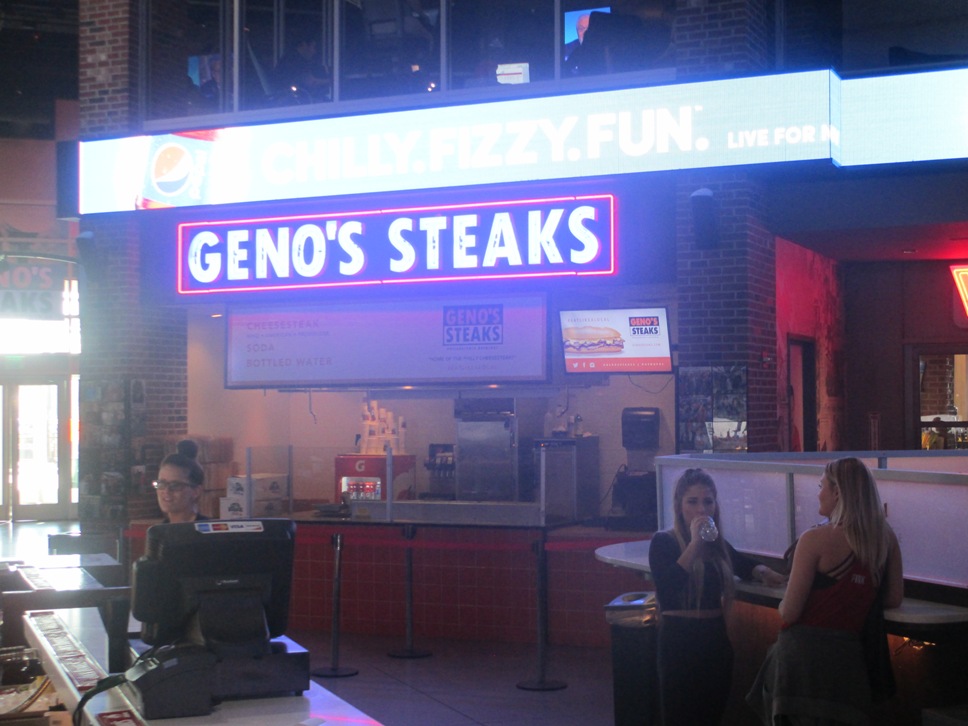 Then there’s the Philly classic Geno’s, with a new location in the Xfinity Live! complex across the street from the ballpark. Geno’s was actually inside the ballpark at one time, and most Philadelphians are familiar with their sliced (rather than chopped as typically done) meat and choice of Cheez Whiz, provolone or American cheese. They’re made the same way and cost the same as the ones at their famous 9th and Passyunk location.

There you are…five choices of that innovative sandwich, the Philly cheesesteak, at Citizens Bank Park. But there’s a whole bunch of other food choices too…like Federal Donuts, Chickie’s and Pete’s crab fries, South Philly Dogs, and much more…stay tuned.