If you somehow manage to pass through the Miller Park tailgating and still have room in your stomach, there is still an outstanding selection of Miller Park food too. Most anything you’d be interested in eating at the ballgame, and possibly a few things you’d never want to eat at a ballpark, is available here.

The bratwurst culture is huge in Wisconsin and Miller Park is no exception; you know sausages are popular in a ballpark where people in sausage costumes race in the sixth inning of every game. But other than as an ingredient in the “bratchos”, I’m going to suggest a few alternatives, because not even I can live by brats alone: 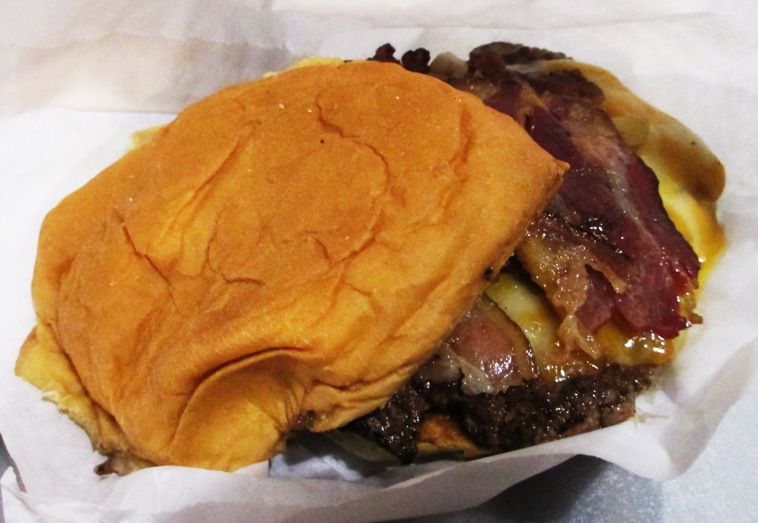 Made by the “Bomb Squad”.

Miller Park Food, Tip #1: The AJ Bombers Burger. Any burger joint that wants to differentiate themselves from McDonald’s is going to mention that their burgers are “fresh”, and AJ Bombers, the eatery with an outpost at Miller, is no exception.

But there is something to be said for that; an AJ Bomber’s burger is the right kind of juicy, with toppings ranging from bacon, cheese, Schlitz onions and peanut butter. (Yes, you read that right.)

You have to wait a bit for an AJ’s burger, and there’s no view of the ballgame from here, so get your fix taken care of before game time…and wash it down with a concrete. 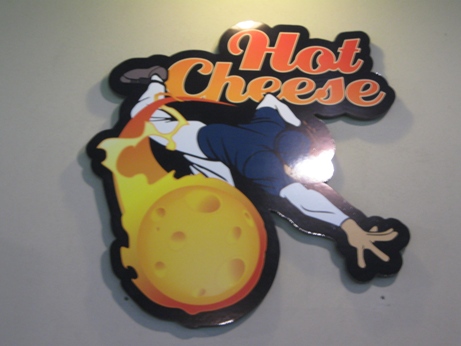 If you can catch it, go ahead and eat it!

If you’re not from Wisconsin, think fried cheese sticks or cheese balls but in nuggets form. A very popular thing around these parts. 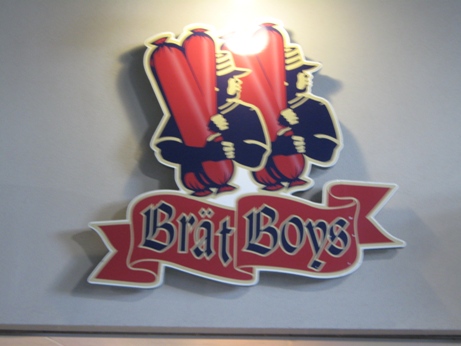 The Brat Boys wear the most expensive clothes.

Miller Park Food, Tip #3: Bratchos. My apologies for not having a picture of the bratchos. I couldn’t find a basket on display, and I couldn’t order one after the AJ Bombers burger and a plate of Rounding Third wings.

But the bratchos are not to be passed up on otherwise. It’s new at Miller as of 2015…and new as a food item that I’ve ever seen. Bratchos are kettle chips covered with four kinds of crumbled sausage (chorizo, Italian, Polish, and bratwurst, the staples at Brewers games), cheese sauce, sour cream, jalapenos, and sauerkraut.

It’s pretty much like a mishmash of a loaded brat with chips, but I’ve never seen them combined before. As professional eaters say when eating odd foods together, it all ends up in the same place anyway.

Those are three unusual and tasty stuffs on the Miller Park food menu, but there’s a lot more, like the Smoke Shack Ham Dinger, J. Agave’s tacos and the inimitable Zaffiro’s pizza. Stay tuned.