The Comerica Park seating chart includes everything from the suites to the rolling Tiger Den seats to the New Amsterdam 416 Bleacher Bar. All have their merits, but here are a few of my favorites, for varying budgets. 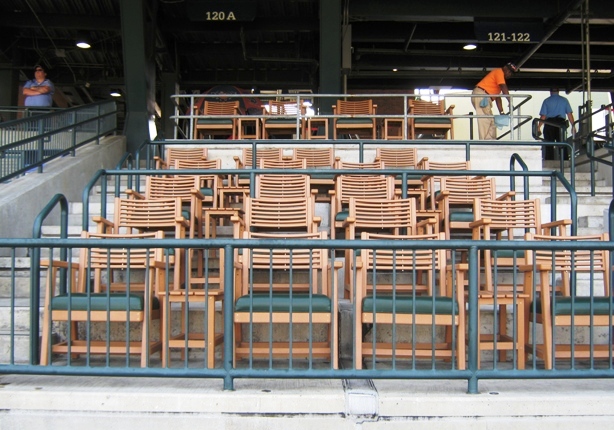 It’s like sitting in class, but with a live ballgame!

Comerica Park Seating Tip #1) Tiger Den Seats. The Tiger Den Seats at Comerica Park are “premium” seats, meaning they cost more but the Tigers throw some nice amenities in with it. The seats are padded, wide wooden chairs, there’s a table next to your chair for food and drinks, and you can order that food to be brought to you.

The Tiger Den Seats are in the back of the lower level of the seating bowl, and they’re mostly covered by the overhang, which can be a nice thing on a hot day. You also can access the Tiger Den Club and Lounge, including the private entrance.

If you do spring for the Tiger Den Seats, try something on the first base side if you can. It’s got a much better view of the very impressive Comerica scoreboard, which can be blocked on the third base side. 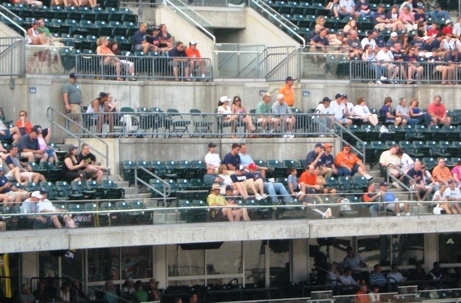 Fewer rows = fewer fans walking in front of you because they forgot to get a hot dog at a baseball game.

Comerica Park Seating Tip #2: Club Seats. I’m not sure why the Club seats in Comerica Park are called the Club seats. They may be nice seats, but there’s nothing exclusive about them, and they don’t include access to any of the clubs. It would be more accurate to call them No Club seats.

But they’re a decent deal for the price. Club seating is on the upper deck, being the first five or so rows sections between the bases.

The first benefit of these seats is the view; they’re fairly high but they’re closer to the action than seats behind them, and the view is unimpeded by traffic. They’re also padded and a little wider, so they’re a bit more comfortable than those hard metal seats that fill most of the ballpark. For a padded seat with a decent view, the No Club seats are a good value.

Nothing wrong with the seats on the third base side, but again, the first base side has a straight ahead view of the impressive Big Board, so go for that if you can. 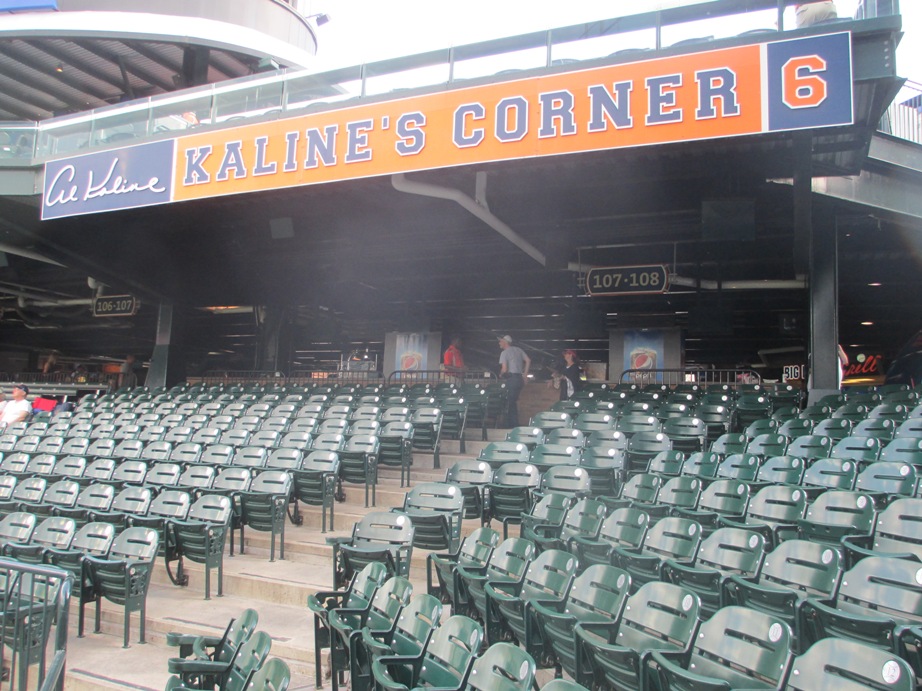 Featuring his autograph and everything.

Comerica Park Seating Tip #3: Kaline’s Corner. All Tigers fans know who Al Kaline was; he was an 18-time All Star and Hall of Fame right fielder who played his entire career with the Tigers. Kaline retired with 3,007 hits and 399 home runs, making him one home run shy of the 3,000 hit, 400 home run club featuring just seven players.

The Kaline’s Corner section is behind the right field foul pole, which can be slightly annoying in some seats, but they are also among the cheapest seats in the ballpark, and with the seats facing home plate, they’re a better deal than the outfield box section 112 next to them, which is angled more towards the outfield.

Kaline’s Corner is also close to the New Amsterdam 416 Bar, the Miller Lite Pitcher’s Pub and other party areas, including those outfield beer kiosks that sell $5 beers. I have read that these seats are home to some profanity from fans (I’ve never understood why people with lesser seats are associated with foul mouths), and they are about as far as can be from the carousel and Ferris wheel, so it may not be the best place to bring the kids. (There are other cheap seats options for parents.)

But if you’re looking for an inexpensive night at the ballgame, Kaline’s Corner is as good as it gets on the Comerica Park seating menu.