Finding a cheap Reds ticket and other deals in my trip to Cincinnati wasn’t difficult. Because of what I do, I’ve learned a few tricks to get the most for my dollar at the ballpark…taking advantage of special offers, giveaway nights, etc.

On my second day in Cincinnati, I hit the trifecta of bang for the ballpark buck.

I usually get the cheapest seat I can get at the game, because when I’m running around taking pictures I’m usually not sitting in that seat much anyway, and it’s usually well into the game before I have an opportunity to sit. Even then, I’m restless thinking I’ve missed something. 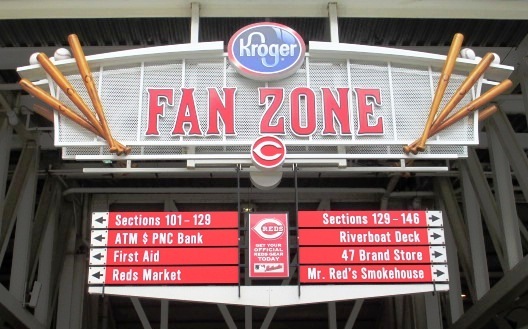 I probably should have checked this out…

So while I ordered a ticket for the Friday night game on StubHub, I decided to just buy the Saturday ticket at the box office, where there aren’t any fees. There were plenty of tickets available for the game, surprisingly, so I knew it wouldn’t be a problem.

Friday night I bought an Outer View Level seat for Saturday’s game for $11 and no fees. Not a great seat, of course, but I didn’t care. It was, as I’ve stated, a cheap Reds ticket. 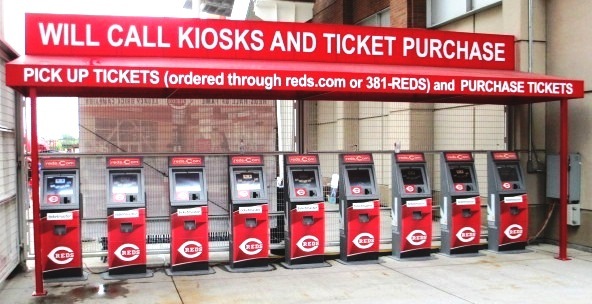 A few of the very prevalent kiosks at Great American. Maybe they don’t like talking to people.

Saturday night the Reds were giving out some fairly nice T-shirts…with “Reds” on the front in American flag colors, and Jay Bruce’s name and number 32 on the back (also in U.S. flag style). Jay Bruce sponsors a group called “Bruce’s Battalion”, and buys tickets for members of the military for most home games.

It’s a pretty nice T-shirt…would probably go for $30-35 at the ballpark, at least.

The Reds and LaRosa’s Pizza also run a very popular promotion: if the Reds pitchers strike out 11 batters in a game, LaRosa’s gives a free pizza to everyone at the ballpark. You read that right…LaRosa’s gives away upwards of 30,000 pizzas. 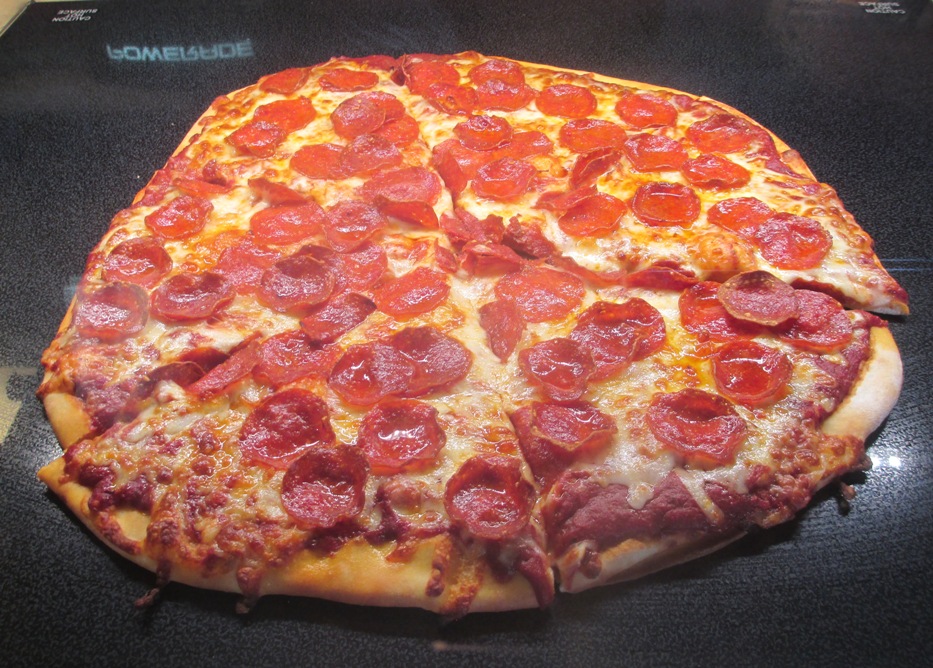 LaRosa’s is pretty good as ballpark pizza goes. And I’m a pizza snob.

Mat Latos was on the mound for the Reds, and he sat down a bunch of swinging Mariners. The total mounted and the crowd became more enthusiastic with each whiff…eight, nine, then ten. By this point I was sitting high up in the rafters behind home plate, so I had a decent view of everything.

With ten strikeouts on the board some of the crowd started chanting “Pizza! Pizza!” every time a batter reached two strikes. At one point a Mariners hitter had two strikes on him and took a half-swing. The home plate umpire appealed to third base, who signaled safe, the batter didn’t swing. He was loudly booed. It was everything that’s great about baseball.

But Latos did soon pull it off, and the Reds faithful of course went nuts as the scoreboard informed them that they would all receive a free pizza. Then I saw on the bottom of the board: “starting tomorrow”. Unfortunately I was leaving town the next morning. Rats.

But Wade, the nice fellow running the Sharonville LaRosa’s, was happy to honor the ticket, and I got my first taste of LaRosa’s…which as it turns out is pretty good pizza, better than any of the well-known chains in my South Jersey neighborhood. It was a personal pie, certainly enough for one person and I was able to pile four toppings on it. And the price couldn’t be beat.

If you want it today, you’re just gonna have to buy it here.

I think this is a great promotion for both the Reds and LaRosa’s…they could run commercials with the crowd chanting, and the “Pizza!” chant could become a Reds tradition. Then again, I’m not sure LaRosa’s wants to give out 35,000 pizzas so frequently…I’ve heard the Reds pitching has been costing them a lot of money this season.

Regardless, it was a great score for the author of Ballpark E-Guides. For a grand total of $11, I nailed down a cheap Reds ticket, a nice Reds T-shirt, and a delicious pizza. If you want to throw in the $1 O’Doul’s I drank for being a designated driver, then throw in a non-alcoholic beer for a total of $12. Parking in Newport cost me $2. So for $14 I scored close to $50 in value there at normal prices.

Not bad for a sport many people think they can’t afford anymore. Try this page if you want some tips for cheap tickets.