Even if you’re getting a loaded dog, you can’t pass up on Bertman’s ballpark mustard.

Somehow many people, myself included, have confused the “Stadium Mustard” made by Davis Foods with the authentic, served-since-the-League-Park-days Bertman’s Ballpark Mustard that goes on most hot dogs served at Progressive Field.

Joe Bertman’s spicy brown mustard has been part of Cleveland since the 1920s, while the “Stadium” version was made by another company smart enough to give it a similar name and make it available in retail stores first.

The two are similar in taste. Both are spicy Dijon deli-style mustards, better in quality than the French’s yellow usually found at the ballgame. Bertman’s takes pride in not watering down their mustard and using the finest vinegar; Stadium Mustard is pretty thick too. The only difference (according to a West Side Market vendor) is that the Stadium Mustard has cayenne in it.

My friends at TickPick have Guardians tickets…they offer a best price guarantee, a buyer’s trust guarantee, and NO service fees. Sounds like a no-brainer to me!

Click here to order your Guardians tickets on TickPick! 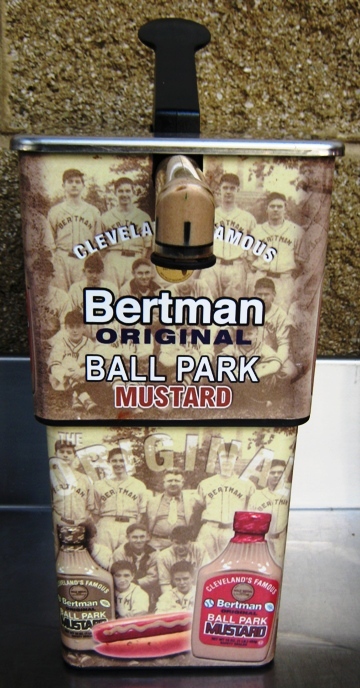 Be careful of impostors that spell “ball park” as one word!

To this day Stadium Mustard is easier to find in supermarkets and elsewhere, including in sports arenas outside of Progressive Field; I was unable to locate a bottle of Bertman’s in my travels except at the West Side Market. But despite their similar tastes, Bertman’s Ballpark Mustard is the real thing if you’re looking for authenticity.

It’s not that Stadium Mustard is bad by any means, just be sure you know what you’re getting.

(Note from Kurt: I received an e-mail about this piece from someone who remained anonymous, accusing me of “mustard propaganda”, which may be the funniest thing I’ve ever been accused of. As far as I can tell there aren’t any factual errors here, but if so feel free to call me out.)

Planning a trip to Cleveland? Save a bunch of money on hotels, flights and rental cars…book your trip with my friends at Hotwire! (It’s still Kurt’s favorite!)

Click here to start booking your trip to Cleveland and Progressive Field today!