The Best Mascot in Sports – The Phillie Phanatic

The Best Mascot in Sports – The Phillie Phanatic

No one in the Philly area would even argue who is the best mascot in sports. The Phillie Phanatic tops them all. Easily.

I wear several writing hats in addition to this, one of which is as a staff writer for an excellent publication called JerseyMan magazine. Some time ago they offered me a very cool assignment; I had the privilege of interviewing Dave Raymond, the original Phillie Phanatic. You can read the article here or order the April 2015 edition of the magazine. 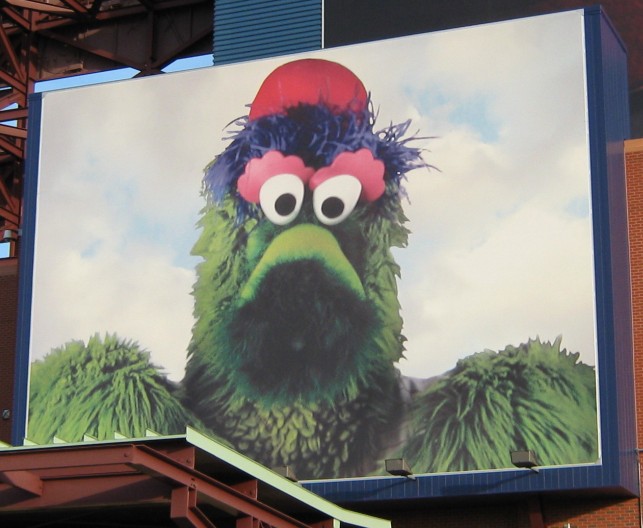 Imagine if this guy was reading a Shakespeare script.

It was an honor to interview Raymond, because as a Philly-area native I have always loved the Phanatic. Every night he rides on onto the field recklessly on an ATV, trips up grounds crew members, thrusts his ample hips at umpires, and dances provocatively on the Phillies’ dugout.

But best of all, he has no qualms about taunting the opposition…to the point where Tommy Lasorda, one of the game’s most beloved figures, once snapped at his antics, and came out of the dugout to beat the s*** out of the Phanatic. Lasorda even once wrote a blog post called “I Hate The Phillie Phanatic”.

It wasn’t until I was putting together questions for Raymond that I realized that one of the reasons the Phanatic worked so beautifully was because of his hometown. 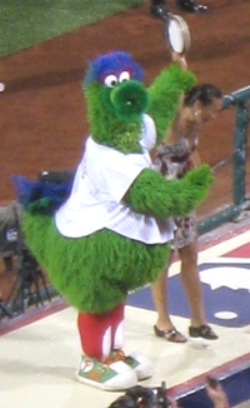 Philadelphia fans aren’t the hideous monsters that they are often made out to be (see the real story of their throwing snowballs at Santa Claus here), but they can definitely be tough. Wearing Penguins gear at Flyers games isn’t very wise, and showing up anywhere within a five mile radius of Lincoln Financial Field wearing anything Cowboys-related is justification for a sound beating in many fans’ opinions.

Raymond is a Philadelphia fan himself, and he brought that mentality to the Phanatic character. That is commonplace behavior for mascots today, but back then it was unheard of. Imagine a grounds crew worker taunting an opposing manager to the point of a fist fight; at best he’d be severely reprimanded. But put someone in a big furry green costume to do it, and it’s the stuff of baseball legend.

The Phanatic constantly pushes boundaries of acceptable mascot behavior, yet at the same time he puts a lighthearted cartoon character face on the Philly sports fan. He is anything but the harmless, forgettable costumed character that you’d expect to see prancing around a field playing with kids. He is like no other mascot you’ll ever see…unless, of course, another mascot learned his shtick from the Phanatic, as so many today have. But none of them are nearly as funny or endearing.

The Phanatic dances and falls on his big behind, and kids love him for it. He also hassles and badgers opposing players and managers, and Philly adults really love him for it. 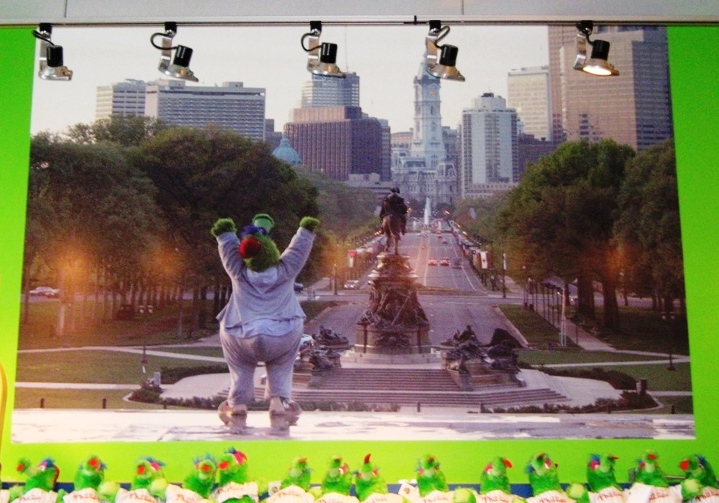 Few pictures make me more proud to be a Philadelphian.

Today the Phanatic is portrayed by Tom Burgoyne, who is every bit as good at the performance as Raymond was; a fan would scarcely know the difference. Burgoyne does a great job, but the costume, both Raymond and Burgoyne would probably admit, seems to have a mind of its own.

I’ve often said that the Phillie Phanatic is worth the price of admission to a Phillies game. I still think so. He’s a blast like no other mascot, and he fits perfectly in a rabid sports town.