If there was a simple answer to how to avoid obstructed views at Fenway Park, there wouldn’t be an entire book written on the subject. But I’ll give it a try.

As beloved as Fenway Park has been in its century of existence, it’s not much fun when one is sitting in a seat with a blocked view because of the many support poles holding up the upper deck. 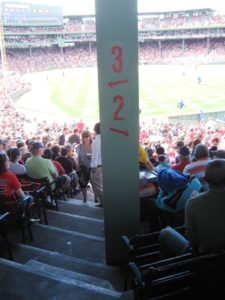 Did they really need to put the pole here to tell me which section is which?

I believe it was architect Janet Marie Smith that said about Fenway that “the support poles are your friend”. What she meant was that the support poles make it possible for the upper deck–usually cheaper seats, although that’s not really the case at Fenway–to be closer to the field. But anyone sitting in a seat where a support pole obstructs their view is not likely to be feeling friendly.

The “Grandstand” section of Fenway Park is where the problem is most pronounced. There are seats that are literally directly behind the poles. The Red Sox used to sell them at a discount, but they don’t anymore.

They do stamp certain tickets with an “OV” for obstructed view, but their standard is very high, so avoid an OV ticket even if it means standing room is the alternative, because you’ll probably end up standing somewhere anyway.

I could have written a whole guide on how to avoid obstructed views at Fenway Park (and Tim Shea has already done an excellent job of it), but since most people don’t want to get too involved in finding the perfect seat, here are a few basic tips. 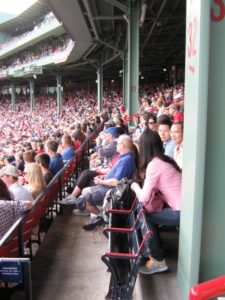 Ah, here’s the trick…just sit in FRONT of the poles!

The support poles are usually in the first or second row of a Grandstand section, and in most cases they’re at the end of a row–either at Seat 1 or the other end, maybe Seat 16 or Seat 24, depending on the size of the section.

There are also some poles in the back of Grandstand sections, and there are sometimes two or three rows behind them. The same rule applies in most (but not all) cases, Seat 1 or the last seat of a row.

You are most likely to have a problem in Rows 1-4 of a Grandstand section, and this is (usually) in the low-numbered or high-numbered seats. If you have the luxury of seeing the seat number (which you do not on StubHub), you should be okay in most sections with Seats 5-10.

Only in the outfield do these general rules get a little wacky…best to just avoid rows 1-4.

As you get into the higher rows in the Section, the pole becomes less of a problem, and by Row 5 or 6 it’s not likely to be too much of an issue. That’s not to say it won’t be at least a little annoying, but it’s better than missing all of third base. 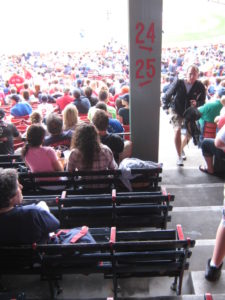 The obstructed view seat is a perfect place for your bag.

The Grandstand is also covered by the upper level, so the highest rows lose the view of the nice new Jumbotron scoreboards. This isn’t as bad in Fenway as it in the ballparks with the super-colossal molecular resolution scoreboards; after all you’ve got that hand-operated fellow in left field that tells a Red Sox fan everything they need to know anyway. But if this matters to you, avoid anything higher than about Row 14 or so.

Sometimes a support pole can be right in front of a seat in the first row, but if it is, the Sox will mark that as OV. So if you can get a first row seat that doesn’t say that, you should have a very good view with no obstructions at all. For the price that’s a great seat at Fenway. 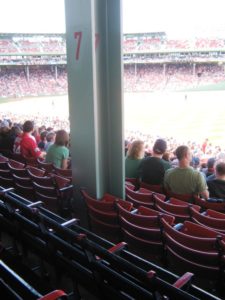 At least the pitcher can’t see you heckling him.

One last thing: The support pole can sometimes be in the last row of a Loge Box section, which is usually Row XX. This is more common on the first base side. If you’re sitting next to one of these, it might make for a lot of leaning forward at the very least, and it isn’t likely to be fun. So just to be sure, avoid Row XX in the Loge Box seats.

That’s some basics on how to avoid obstructed views at Fenway Park. You have two options if you really want to get into that; there’s Tim Shea’s excellent guide for Fenway Park, or the Precise Seating website, which has ratings of nearly all of the seats in Fenway Park and is a great resource especially when buying tickets online.

But if you want to keep it simple, just follow these basic rules. In fact, call it the 5-10 rule…meaning that in most cases, rows 5-10 and/or seats 5-10 are generally the best in the Grandstand sections. And stay out of Loge Box Row XX.

If you want to find the best deal on tickets wherever you sit, read this.