Hopefully elsewhere on this site I’ve helped you with a few Tropicana Field tips. Worth the trip just to learn how to make your World Series cheesesteak Philly-style, right? Here are a few more things not to miss at your next Rays game: 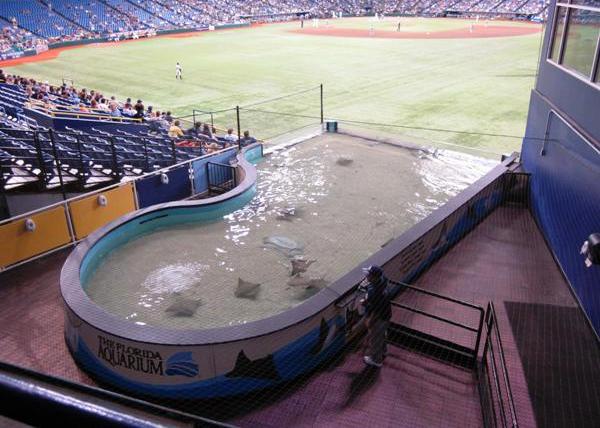 Because nothing is more baseball than touching slimy fish in the outfield.

Extra Tropicana Field Tips, #1: The Rays Tank. In the ongoing effort to add entertainment value to a ballpark that lacks retro feel value, the Rays collaborated with the Tampa Bay Aquarium to build the Rays tank, a 10,000 gallon tank in right field next to the Everglades BBQ restaurant.

People get in line to touch and feed the cownose rays swimming around happily, and you can watch the game while you’re petting the slimy critters. If that’s not baseball, I don’t know what the heck is.

Time in the area is limited and there is hand cleaner to use afterward. If you’re interested in the Rays Tank, it’s not far from the main rotunda entrance, and you should get in line early because the lines get long. 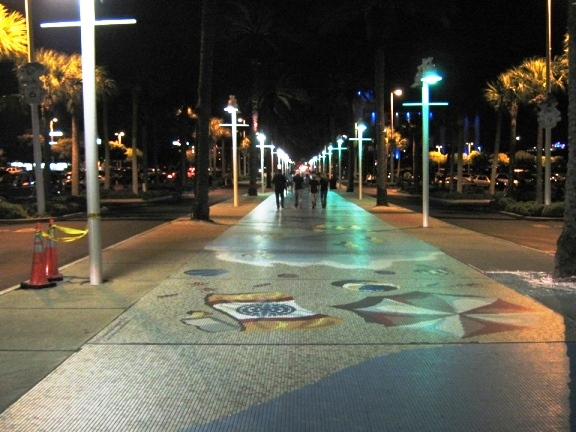 When the kids get bored, have them count the tiles.

Extra Tropicana Field Tips, #2: The Mosaic Tiles Path. Splitting the parking lots east of the big white dome is a walkway of mosaic tiles, with over a million tiles depicting an aquarium of tropical fish.

It’s captivating anytime, but it is especially cool at night when lit up by the streetlamps above it. And if the Rays pull off a victory, you can have a look at the orange lit dome over the ballpark from outside. A nice two-fer. 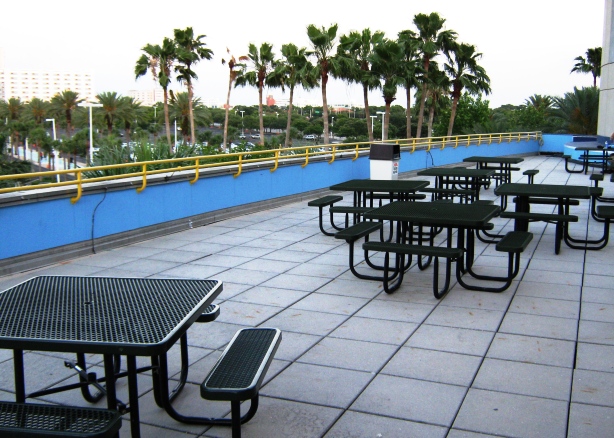 Can’t get this view outside of Florida.

Extra Tropicana Field Tips, #3: Cuesta Ray Cigar Bar (And The View). The Cuesta Ray Cigar Bar is a room for cigar smokers, with its own humidor, a billiards table, TVs to watch the game on, lounge sofas and a full bar. A great idea, and it is the only place other than the ramps where smoking of any kind is allowed in the Trop, although there is no view of the game from the room.

But the coolest thing about the Cuesta is the patio outside, in an area where weather is often very nice, and a view of St. Petersburg that is boffo at dusk. If the game isn’t quite holding your attention, it’s a nice place to see a fine view.

That’s a few things to check out at the Trop; be sure you’re getting the best deal on the best seats with this handy little guide.