Miller Field? Does it seem weird?

I first visited Miller Park in its inaugural season in 2001. I didn’t question that it was an impressive structure, or that there was anything less than a pleasant experience at the place.

I did have some misgivings about it, though. The first was just how massive it is, and such an enormous venue didn’t seem suited for a smaller market like Milwaukee.

“Why do we park on a driveway and…”

Indoor baseball also doesn’t work as well, and even Brewers fans will often admit that Miller Park feels like an indoor facility even when the roof is open, as most retractable roof domes do. At the time I didn’t know that the windows in the outfield could be opened, and the windows more than many things give Miller an indoor feel.

Since then I have researched Miller Park quite a bit, and have learned to quite love the place…baseball in Milwaukee and at Miller Park is unique and special for so many reasons.

I also don’t consider it a small thing that the Brewers may be the most value-friendly team in baseball…certainly so compared to the Cubs, who are inexplicably charging as much as $65 for seats without backs these days.

However, if it were up to me (and thankfully these things aren’t), I might propose that the name of the place be changed to “Miller Field”.

The ballpark boom began with Oriole Park at Camden Yards. Since then most teams have included “Park” or “Field” in their new venue names, the two exceptions being the cities who kept the name of the previous venues—Busch Stadium in St. Louis and Yankee Stadium in New York. (Incidentally, both teams won the World Series in the first season of their new ballparks. Not sure if that’s a sign.) 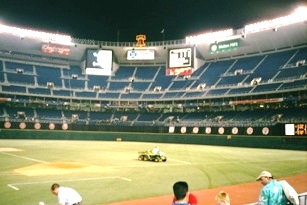 When Janet Marie Smith offered her architectural consulting services to the Orioles before the building of Camden Yards, she told Orioles president Larry Lucchino: “They (meaning architectural firm HOK and the Maryland Stadium Authority) want a stadium, and you want a ballpark.” She was hired right then.

And during the design and construction, the Orioles—who were smart enough to include “design concurrence” in the contract with HOK—fined any employee who called it a “stadium” five dollars.

Since then new ballparks are almost all tagged with “park” or “field” in their names. But the two words are slightly different in connotation. “Park” is part of the word “ballpark” and as such it carries a connotation of an open air baseball venue with a small number of seats, like Oriole Park, PNC Park, AT&T Park or Fenway Park.

The word “Field” doesn’t have that similarity, which to me (and I’m guessing to the people who named these venues) makes it more appropriate for the ginormous retractable roof domes that have been built in locations with more extremes on the thermometer, like Safeco Field or Chase Field.

Welcome to the Tropicana Planetarium!

You could add Tropicana Field to that list—imagine that big white air-conditioned dome being called “Tropicana Park”. Or Rogers Centre in Toronto being Rogers Park. It just wouldn’t sound right.

Somehow the word “Field” seems more appropriate than “Park” for a baseball venue with a roof, whether the roof is optional or not. You could imagine a “field” protected by the elements, but it’s a bit harder to picture a “park” being surrounded with weather protection.

As such Miller Park just seems a bit inappropriate as a name. As does Marlins Park in Miami, although I expect some corporation at some point will offer the Marlins an obscene amount of money to put their name on the shingle, after which the name could well be changed to include “Field”. Tropicana Field was once called the Suncoast Dome; Cinergy Field, when it existed, was once Riverfront Stadium.

As I’ve said, I’ve read some reviews of Miller Park where people have somewhat bemoaned the indoor feel of the venue. OK, maybe I’m just talking out of another orifice, but somehow I think that might be a little less bothersome if the home of the Brewers was called Miller Field.