One of the many goals of Ballpark E-Guides is to let people know where they can get a meal and/or an inexpensive brew before or after the game, and the Taxi Crab from Chickie’s and Pete’s gives Phillies fans the best of both worlds.

Ballpark beers are running $7.50 and up these days, and we all know how much ballpark food is. At Chickie’s and Pete’s, you can get their famous crab fries with a beer to go with it, at a much cheaper price than in the ballpark and in a climate-controlled eatery. And they’ll give you a ride to the game.

Book your ideal Phillies parking spot ahead of time…with my friends at ParkWhiz! 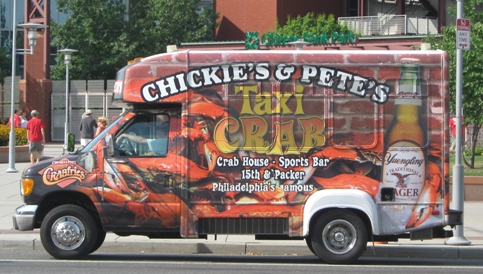 This truck plays loud music as it goes by.

Chickie’s and Pete’s is a popular Philadelphia area restaurant chain, very well known among sports fans in the area. Their Taxi Crab shuttle carries passengers from the restaurant’s Packer Avenue location to Citizens Bank Park (or any of the sports venues in the complex).

They also pick up passengers at the park to take back to the restaurant for a meal and good times, and then return them to the ballpark parking lot when they’re finished, giving you something to do as the Bank’s parking lot slowly empties. (And yes, it can be very slow.)

The shuttle is free; unfortunately you have to pay to park at C&P’s. It costs a bit less than parking at the ballpark though, and your car is valet parked. Afterward you won’t have to deal with the sometimes rough post-game traffic in the Bank’s parking lots.

In addition to getting a better deal on parking and an easier exit, you can enjoy a meal at a popular local institution. It’s especially great for visitors to Philadelphia.

At the ballpark, you’re paying extra for the cheese dip.

Chickie’s and Pete’s has a stand in Citizens Bank Park, but the lines for the fries can get long, and they’re much more expensive at the game (they charge extra for the cheese sauce at the ballpark, too). You can park here, order fries to go, and get a ride to Citizens Bank Park’s front door.

Besides the fries, Chickie’s and Pete’s has some pretty good grub at reasonable prices. You won’t save too much money eating here over eating at the game, but there’s a decent selection of seafood and a long list of quality beers. They’ve been voted #1 Sports Bar on the East Coast by ESPN (beating back Cask-N-Flagon in Boston, incidentally), and the Best Seafood and Wings by the Philadelphia Inquirer. It’s a big place, so you can probably land a seat.

And the beer, obviously, is cheaper.

So there are three benefits to the Taxi Crab: less of a wait for the crab fries, less post-game traffic hassles, and a less expensive place for a drink before or after the game. Worth a shot for something different.